Aerial salad are a unique band. They've been featured on every punk playlist worth its salt on Spotify as well as appearances on Soccer A.M, BBC Radio, Radio , RTE and not to forget the time Stewart pearce brought them up on national radio just because he loves em.

They've been around 6 years and have sold out gigs all over the UK as well as embarking on several European tours, their 2020 album Dirt Mall was highly regarded as a timeless classic and is one of Frankie Stubbs favourite albums (go on, ask him).

They've done all of this on their own label Roach Industries, they're a Manchester based band with members now spanning the whole country, I think everyones played drums for aerial salad at some point.

They've played MPF before and have been brilliant everytime, some even say "incredible".

Jamie likes to go for long walks, Mike enjoys a hot bath and a good book and Jake enjoys livin on road, trappin out and shotting bags n bags of flake.

Watch them play their acclaimed album "Dirt Mall" along with (songs that haven't come out). 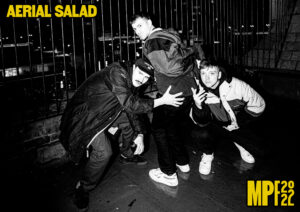