Breacher is a hardcore band from Boston. Not Boston.

Born mid-2019 as a solo project by Luke, who roped in brother Jordan of Alt-rockers Kill The Ideal to drum on some demos, which grew into something completely different than originally planned. A vision, along with a few ideas captured on a laptop, was enough to tempt Jay to pick up a bass and bring Dan (Burning The Prospect/Wolfbeast Destroyer) to the practice space. Over the next few months, demos transformed into the first fully formed songs and Breacher were ready to go! Then, the world came to a grinding halt…

2020 through 2021 was pretty stop/start with regards to getting out of the practice room, the first 7 songs were recorded in July 20 at Stuck On A Name Studios, plus two latest singles “Brick By Brick” & “Hollowed Out” the following July, mixed by Owen Claxon of Kill The Ideal. Here’s hoping 2022 is the year where some sense of normality can resume. 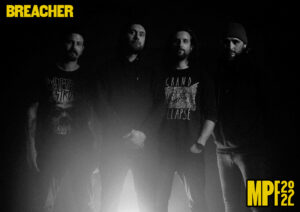