Now a four piece outburst of riot grrrl influenced post-punk that are drawn to the comical, Smoking Gives you Big Tits are as likely to be found celebrating the ridiculous as calling out the actions of the government. They were originally a two piece, consisting of vocals, guitar and kazoo, that formed off the back of a fag packet in 2019.

Their aim was to make cathartic music that facilitated high octane performance, humour, or both. They released a single, ‘My favourite fact about Maggie’ in 2020, after which they looked to expand their line-up, adding bass and drums by the time their next single release ‘Bang to Rights’ came out in 2021. They’re currently working on their debut album.

While the current line-up has only been formed a relatively short time, all members have previously worked together in a number of different bands spanning from Big Band Jazz to Mexican Americana to Metal. But never have all four members worked on something together before. Their wide scope of musical influences and backgrounds is evident in their songs which range from the absurdly comical to the politically charged. It’s hard to describe Smoking Gives You Big Tits, but what remains consistent is their high energy performances, earworm riffs that won’t allow you to stand still and their unmistakable signature vocals that weave delicate vibrato straight into full volume belting screams and back again. You’ll leave live shows feeling empowered and within them, you’ll be pulled between laughter, fear, and just wanting to throw yourself into the pit.

Smoking Gives you Big Tits are a unique band to experience live and they’ve only just begun. 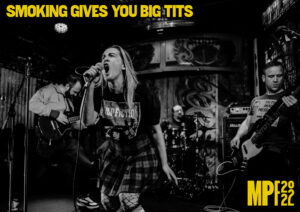