Just when you thought it was safe to go to a gig, Belfast’s hard-touring rock ‘n’ roll wrecking machine the Dangerfields are back!

Between 2000 and 2010, frontman Andrew Griswold and a revolving cast of bastards played every two-bit dive that would have them, and several that wouldn’t. No venue was too small, no drive too hellish, no fee too non-existent. They took the stage (or floor) close to a thousand times, pissing off the likes of Zeke, the Dwarves, the Supersuckers, Nashville Pussy, the Misfits, the Damned, Less than Jake, Flogging Molly, Poison Idea and DRI along the way.

In 2002, they opened for coven-dwelling sex-metallers Rockbitch in Birmingham. (The night climaxed with the Dangerfields’ bassist winning the infamous ‘Golden Condom’…)

In 2004, Iron Maiden legend Bruce Dickinson personally invited them to appear at his BBC 6 Music roadshow in Belfast, alongside Therapy? and Funeral for a Friend.

In 2007, they defiled the circuit’s larger halls as special guests of Stiff Little Fingers on their 30th anniversary tour across the British Isles.

They played – and stayed overnight – at the Norwich pub owned by serial killer Steve Wright on multiple terrifying occasions.

Irish thrash stars Gama Bomb did their first ever tour supporting the Dangerfields, and later recorded a cover of the DFs’ song Maniac for an EP.

This heady CV (and a blistering back catalogue of tunes) means the Dangerfields were one of only two Northern Ireland bands featured in Ian Glasper’s recent, authoritative guide to post-millennial UK punk, The Scene That Would Not Die.

Griswold’s youth was misspent blasting classic rock, heavy metal, hardcore punk and pop records, and he brings these influences to the Dangerfields. Their music is the missing link between Motörhead and the Ramones – AC/DC meets Discharge, the punk Slayer.

During the pandemic, Griswold has conjured up 40 fresh hell-tracks, destined for the long-awaited follow-up(s) to 2006’s Born to Rock opus. The brand-new, 90-second, 4-4 assaults are sprinkled with Sabbathy riffs, Stonesy grooves and some ’50s-style piano-thumping. Lyrically, it’s the same old schtick – girls, horror movies and life on the road.

In 2022, Griswold is joined live by familiar facelifts from the original era – axemen Wee Gay Bryan and Hot Rob Karloff, and four-stringer Jamie Delerict. Together, they deliver guitars that slash like Richard Ramirez on a blind date, bass that sounds like a Messerschmitt backfiring and drums that seem to be racing each other to the end of the song – all topped by AG’s vile shriek.

The Dangerfields: putting the ‘fast’ in Belfast and the ‘fuck you’ in ‘fuck you’ since 2000. 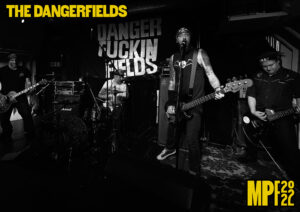