Concocting a potent sonic assault that recalls the foreboding darkness of Black Sabbath, Savages’ monochrome post-punk and the dirty breathlessness of Bleach-era Nirvana, the Manchester quartet create a confrontational racket that takes no prisoners.

The band’s name is inspired by the hysteria which accompanied the witch trials in Salem, Massachusetts, and Europe, which the band have long considered were a means to belittle, suppress and diminish women.

“There’s a big emphasis on female empowerment and female anger,” says bassist Alex of the message raging behind the band’s music. “It’s about celebrating yourself and self-expression. Not being stifled and held back.”

Formed four years ago through mutual friends, the band went through several personnel changes before arriving at the current line-up. In 2019, Alex, Annabelle, vocalist Amy and guitarist Alisha released rabid single Berzerk(h)er, followed by eerie track, The Hallow on Venn Records, which the band worked on with Creation Records founder Alan McGee, the Manchester scene legend who launched the careers of My Bloody Valentine, Oasis and Primal Scream.

“There’s something about playing heavier music that feels so empowering,” says Alisha. “We all have completely different music tastes and inspirations, but that’s what makes our sound so unique.”

“It’s important for us to do things our own way and represent ourselves as we wish, regardless of outside opinion,” adds drummer Annabelle. “We represent an honest voice about breaking out of the indoctrination in our society and all oppressive institutions.” 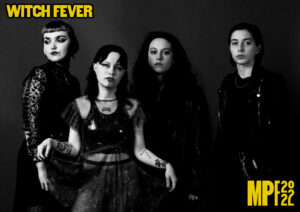