Multicultural protest band at the borders of skatepunk and metal born in Venezuela, now based in France with a multicultural diversity that comes from each of us: France, Italy, Venezuela, thus the baseline "Punk rock from Everywhere". "We speak a broken English between us but we’re doing fine". The band's lyrics sing in favor of social awareness, thoughts, freedom of speech, and life through powerful riffs, palm mutes, wailing solos and multiple vocals reminding of classic and modern punk rock.

In the scene, Zombies No shared with prominent Latin-American bands such as Dischord, TheZeta, 69 Enfermos, DobleD, Play Attenchon, besides other prominent bands from the punk rock scene as Lagwagon, A Wilhelm Scream, Adolescents, F.O.D, For I Am, Darko, Teenage Bottlerocket, and more.

ZombiesNO have performed in many countries as Colombia, Ecuador, Peru, Venezuela; United Kingdom, Germany, The Netherlands, Italy, Switzerland, Croatia, Hungary, Bosnia, Austria, Slovakia, Czech Republic and of course France. After three EP (Encarando la Muerte-2010 / Divided We Fall -2018 / ALL YOU CAN HATE -2020) and one LP (La Única Culpa que Tengo -2015), the band just recorded on May 2021 their new LP "The Big Reset" recorded by Sébastien Bedrunes and mixed and mastered by Jason Livermore, out Spring 2022.

The band is looking forward to spread its music everywhere around the world. 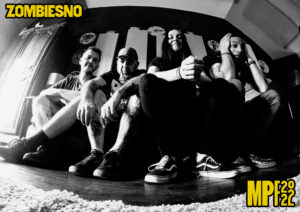