Headlined the second MPF, back in 2016. We were so excited that they were coming back, particularly playing their insanely great album ‘Cavalcade’ in full. Although we are equally honoured that Chris Cresswell has agreed to play some tunes for everybody through our Instagram on Friday. This band, and person, embody a lot of what MPF is about and we can’t wait to see him.

Another one of our headliners for MPF2020, Red City Radio were due to headline the Friday night – so they’ve stepped up in place of Bar Stool Preachers to bring the party for us on Instagram Live. Love this band and the humans in it.

They played a raucous set at one of our afterparties in 2018 and were due back for 2020 with a new album under their arms. However, there’s been a virus-sized spanner in the works so until we re-arrange (and they finish the record!) we’ve got the charming Stu Daly playing some Chewwy songs for us on a Friday night, hard to beat.

Erica was due for double duty at MPF2020. Playing in their dream-themed punk rock band Somnia with a star-studded supporting caste as well as tearing it up on our acoustic stage. We’re psyched to have Erica on board for this, and they were the main inspiration for this Instagram gig after ‘hosting’ a cracker on the Specialist Subject Records Instagram last week with the likes of Jeff Rosenstock and AJJ on board too!

Formerly known as Great Wight, Proper. released one of the albums of the year last year. American afro-punk from Brooklyn, New York. Erik will be joining us from the East Coast.

I recently recommended Me Rex to a workmate and described them as Modern Baseball meets Frightened Rabbit and I think I’m going to double down on that.

After 6 years of organising we finally got the stars to align and managed to get Cultdreams (F.K.A Kamikaze Girls) on an MPF line-up – and look what happened. Still, Instagram Live is as close as we’ve got in 6 years and I can’t wait. Lucinda also designed the MPF Bee that was all over our stages and promotion (and beer!) last year. Her Patreon is below, give it some love. 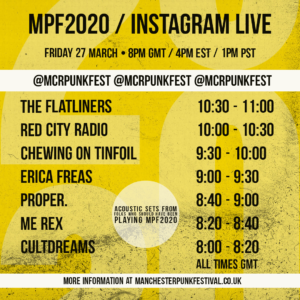