It’s time for more bands! April is drawing ever closer and we are so excited about the line up. This will be our final group of bands to fill your eyes and ears so if you haven’t already, it’s time to grab your ticket. We’ve sold well past the halfway mark!

Who caught a date on the OFF WITH THEIR HEADS tour recently? Fear not if you didn’t, they are coming back. A band that grows more popular as each year passes and one of the bands we’ve been hoping to invite along since we started – the time has come! Another band we have been desperate to bring to the party is GUNS ‘N’ WANKERS. We’d given up hope of it ever happening and then last year they returned from the dead to remind us why they are so highly thought of. Just spiffing fam! THE BAR STOOL PREACHERS might be the hardest working band in the country right now. They’ve been all over America and Europe since they blasted through MPF last year so we decided to ask them back before they are too famous for us.

Some old friends are coming out to play. Currently the only band left out of New Mills, the not-so-young-anymore STAND OUT RIOT are back with their family feel ska punk (and it’s about time to be honest). Their recent sold out NYE show was wild! JUST PANIC are making an incredibly rare appearance for us this year which is just lovely and they’ve even decided to upload their old tunes to Spotify because that’s what the cool kids do. MILLOY are also back with their loud, impassioned catchy punk rock songs that burn with a melodic ferocity, a sound rarely heard on these shores since Leatherface called it a day.
As always we like to keep things heavy where possible so we’ve invited back the darlings of Darlington, IN EVIL HOUR and the outrageously good and unique FIT TO WORK down from Scotland, both of whom were seen recently at the Hell Hath No Fury / Garlic Bread Club fundraiser for Solidarity Not Silence. They both bring their own take on hardcore and are definitely worth your time. If that wasn’t enough for you, Finland’s DISTRAL are back in Manchester with their insanely good blend of metal and punk, the disgusting grind two piece FIDGET are mooching over from Leeds along with FATALIST, the hardcore band from Manchester/Salford who are making quite the noise at the minute. Oh such fun.
More bands you say? Alright chill out, Jesus. HAPPY ACCIDENTS are a ball of neurosis disguised as a children’s birthday party, go and watch them and find out how accurate this is. After years of trying, we’ve finally locked down SHIT PRESENT for half an hour of power. Their indie-emo punk rock featuring members of Gnarwolves, The Computers, Great Cynics and OK Pilot does not disappoint. Along with these we have invited THE SEWER CATS to join us, a duo based in Manchester that are quickly becoming one of the city’s little gems.

Bristol’s NO PULSE will blast out more hardcore, angrily and in your face whilst Cornish DIY crew BOBBY FUNK are back with songs about cats and sick helmets, renowned for their unique delivery. Legendary punk ‘n’ rollers THE DANGERFIELDS will be playing some lightning fast Zeke worshipping riffs along with the simply amazing COCAINE PISS who are heading over from Belgium to remind us why we enjoyed their set so much at Moving North last year.
Speaking of old friends, our boy and #1 2Unlimited fan CAPTAIN HOTKNIVES is back. He will never be far away from our event and our hearts but with him getting on a bit now, we thought we should invite him to remind us of his unique stand up comedy / acoustic philosophies, as well as his hatred for babies and slugs. RISKEE AND THE RIDICULE were part of one of the best Manchester gigs of last year so there’s just no way they weren’t joining the party. Imagine ‘This Is England’ crossed with grime. Yeah, you read that correctly!
Lion hearted rock ‘n’ rollers GOOD FRIEND are adding to the Irish contingent at MPF2020 with their earnest gruff punk sound and the spellbinding live force that is KERMES will be back for their 2nd appearance after impressing so much at our last event. So far this year, we have announced 3 bands from Japan. Well here is another, please welcome the amazing GREEN EYED MONSTER all the way from Kanagawa. Kanpai!!

LAUGHING IN THE FACE OF are one of the most under-rated bands in the country yet they’ve been around since time began, check out their techy melodic hardcore set to find out why we rate them so highly. Relatively new anarcho punks FALAUN  are also getting involved after impressing in their first year as a band and truthfully, giving Chris Staples two sets over the weekend means he won’t be in our ears trying to get guest list for his great aunt’s neighbour’s dog that definitely drove him to the event. We recently saw KICKED IN THE TEETH play a Horn & Hoof gig in Stockport and enjoyed them enough to invite them along too.

Rounding off this announcement we are delighted that there will be acoustic sets from HELEN CHAMBERS and ERICA FREAS, who can also be seen playing with Misfortune Cookie and Somnia respectively.
That’s your lot from us apart from some funny cover sets to tell you about. We really don’t have a ton of tickets left, GET YOURS HERE! 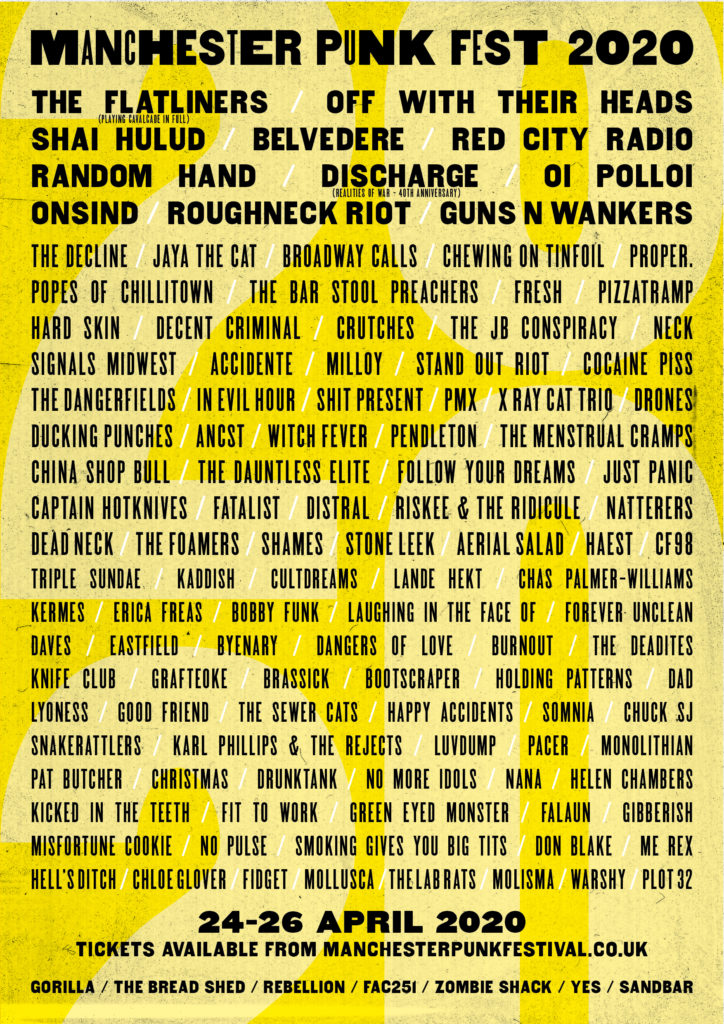