We are mega excited with the line up we have put together and can’t wait to start sharing but first, our Super Early Bird and Early Bird tickets sold out very quickly on Monday. You can pick up our £65 standard tickets now! If you’ve not been before, your MPF2020 wristband/ticket gets you access to ALL venues, ALL afterparties, ALL discounts throughout the city. People have kindly been saying it’s the best value-for-money festival you can get, and we’re inclined to agree with them.

2020 is a big year for us and a big year for THE FLATLINERS, who are celebrating 10 years since the release of their immense album ‘Cavalcade‘, they’ll be playing it in full! We have also invited the godfathers of melodic hardcore BELVEDERE back after a storming set in 2018, they don’t get over here too often so don’t miss it. Along with those two, local cretins RANDOM HAND are coming back for a dance. Always a favourite at every festival they play, it’s a pleasure to have them back again.

It’s been a long time since Portland, Oregon punk rockers BROADWAY CALLS were in the country, but we’ve got them back and playing Manchester next year. After packing out our acoustic stage a couple of years back, we had to get ONSIND to play full band and on a big stage to shout about never trusting Tories.

We are excited to confirm that Scottish anarcho punks OI POLLOI will be joining the party again along with the best folk punk band in the world, ROUGHNECK RIOT, who have enjoyed a full year sitting on their arses because they were tired apparently, sounds like laziness to us. Bringing the accents and the tunes, CHEWING ON TINFOIL are also playing MPF2020, with a new album expected before the festival, there will be more singalongs than ever.

One of the original UK melodic hardcore bands PMX are making their 2nd appearance at MPF, they need little introduction, they are just mint. Making the trip over from Australia, the very real deals in BLIND MAN DEATH STARE are taking time out from their hectic party schedule to give us a little cuddle, they are hard workers and an entertaining live set but we are sure you probably know that already.

Leeds ska rave outfit CHINA SHOP BULL are finally making their long awaited MPF debut, about bloody time, as well as THE FOAMERS who are heading up from London to bring us their mix of punk, crack rock steady, ska, rock and roll and whatever else you can think of.

CHRISTMAS are back at MPF for the second time. There won’t be any wrapping, but there will be a nice big blast of Zeke fuelled rock n’ roll. DAVES will be playing their first MPF. Expect ridiculously catchy and raw punk rock and coffee. None of them are called Dave.

After a last-minute baby-related dropout in 2019, you know we had to get FRESH back on the bill for 2020. Joining them on the trip up from London and  bringing their Clash meets Culture Abuse vibes are DANGERS OF LOVE and ME REX who bring the electro-acoustic-pop you never knew you couldn’t live without.

Everyone’s favourite train enthusiasts, EASTFIELD will also be making their MPF debut, possibly the nicest people in punk. KNIFE CLUB are perhaps the most mysterious band in punk rock. Are they the Banksy of the DIY music scene or just overhyped nonsense? We’ll see. Don’t ask us who they are… we probably don’t know. After recently reforming, Leeds aggro-folk legends, BOOTSCRAPER will finally be gracing the MPF stage. Another band not to be missed are THE MENSTRUAL CRAMPS. Bristol riot grrl that make a lot of noise wherever they end up.

We like things to get heavy where possible. It wouldn’t be MPF without a sweaty pit. Please welcome the incredible d-beat/hardcore punks in WARWOUND, Yorkshire hardcore punks NATTERERS and Athens crust powerhouses MOLISMA in to the fold, it’s gonna be a messy one.

Local scene legends and all round top human beings CHLOE GLOVER and DON BLAKE will be making you cry and laugh respectively. We’re blessed with another visit from Peterborough anarcho-punk heroes in THE DEADITES, alongside a first appearance for MISFORTUNE COOKIE, who had the misfortune of broken limbs keeping them out of the 2019 weekend.

We are crazy excited to be hosting the overseas debut of the amazing GIBBERISH, featuring members of Thousand Oaks as well as the lovely Yuto, a man made famous at MPF by Colin’s Punk Rock World. Our good friends in FOREVER UNCLEAN are heading back over too, we can never seem to get rid of them and we are also super buzzing to have Hell Hath No Fury represented by the amazing queer transcore outfit BYENARY.

Rounding off the acoustic stage for this announcement will be local sweethearts THE LAB RATS and MOLLUSCA, good friends of ours and great to watch live so please check them out.

We’ll be keeping the festival site largely the same for MPF2020, The Union were fantastic to work with and everyone loved being there. One bit of news is we have moved our almost-acoustic stage from previous years, 2020 will see us using Manchester’s newest music venue – YES. This is a four-floor building, we’ll be in the basement where we belong. There’s great food options (pizza and burgers, delicious vegan options galore) and the drinks are brilliant too. They serve Negroni’s on tap for god’s sake. YES is located just off Oxford Road between Gorilla and The Bread Shed. We can’t wait to get stuck in with them. 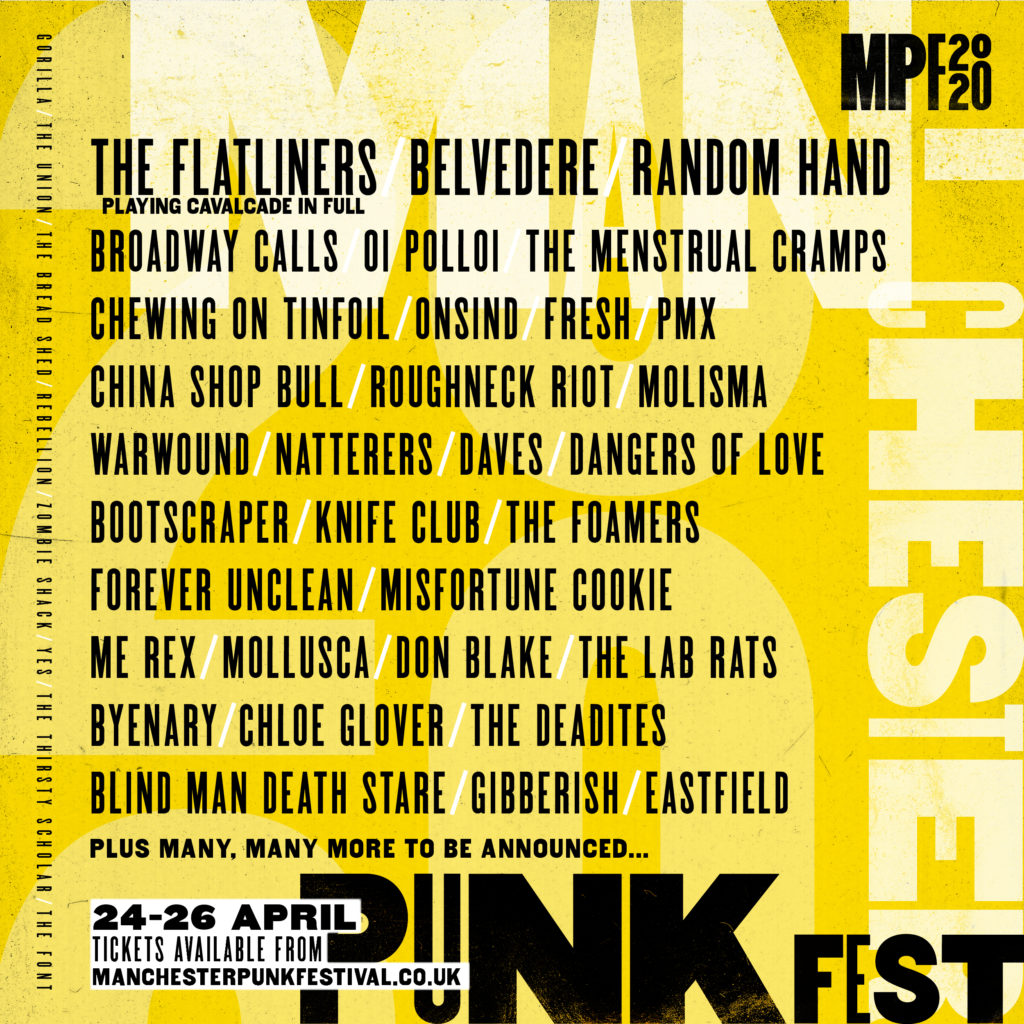