It’s time to announce some more bands! The next group of reprobates coming your way are stacked high. It’s shaping up to be the most diverse edition of MPF yet.

We are thrilled to welcome the legendary DISCHARGE on to our line-up, a band we have been looking forward to working with for a number of years. The originators of d-beat are celebrating the 40th anniversary of their first release “Realities Of War”. If that wasn’t enough to wet your whistle, we have the most innovative hardcore band in history, SHAI HULUD, making a very rare appearance on these shores.  MPF will be one of only two dates. LET’S GET WILD!!

We like to include good friends where possible so this year we have invited back the Welsh problem children and TNSrecords favourites PIZZATRAMP for a party. They’ve gone from strength to strength in the time we’ve known them. Our Australian buddies THE DECLINE are heading over from Perth after several years of trying to make it work for us and Madrid’s finest ACCIDENTE are finally joining the fun. Their last appearance in the UK was back in 2017 and it was a belter! Speaking of good friends, we are very sad but also honoured to confirm that MPF2020 will be the final gig for political ska punkers LUVDUMP. They are a band we go back a long way with so will be very sad to see the back of them (maybe).

It wouldn’t be MPF without plenty of Americans, would it? Say hello to DECENT CRIMINAL, energetic and catchy ‘90s alternative punk/surf from California. Imagine Pup recording Insomniac instead of Green Day. The transcontinental, coast to coast pop project of Erica Freas (RVIVR) and David Combs (Bad Moves, Spoonboy, Max Levine Ensemble) known as SOMNIA are gracing sunny Manchester for the first time along with PROPER., afro-punk brilliance from New York City that wouldn’t be out of place next to Modern Baseball on your shelf. Definitely not one to miss.

The outrageously good and well respected DUCKING PUNCHES are also returning from the saarf and we are incredibly excited to finally welcome the Scottish hardcore legends in KADDISH down to the event. This highly influential band isn’t one to be missed even if they are from Dundee. Manchester’s own PENDLETON are rising from the dead to give us a one off set, their first in an absolute age and local grunge favourites WITCH FEVER will be making their 2nd MPF appearance after a solid couple of years of making an even bigger name for themselves.

HARD SKIN will bring their humorous take on the Oi scene genre to the MPF party. If you have seen them live before you’ll know full well how much of a riot this will be. German crust/black metal powerhouses ANCST unfortunately had to pull out of the last event so we have invited them back to finish what they started! Keeping things heavy, we are also welcoming two piece doom outfit MONOLITHIAN  to get bleak with us.

Flying the flag for UK ska are long serving THE JB CONSPIRACY who warmed up for us last year and KARL PHILLIPS & THE REJECTS who impressed us a lot at their Anarchistic Undertones gig last May. A few of us traveled to Japan last January and met one of the nicest bunch of people in SHAMES, skate punk/melodic hardcore with big smiles. There was no doubt they would be making an appearance this year. On our travels over the year we also ran in to CF98 from Poland who blend skate punk and pop punk perfectly.  We’re very excited for their MPF debut.

Please welcome BGB favourites PAT BUTCHER and two piece rock and rollers SNAKERATTLERS to MPF for the first time, both hard workers and regulars on the local circuits. Another two bands that feature on local gigs regularly are local mouth holes AERIAL SALAD and the soft southerners in TRIPLE SUNDAE. We don’t like a single member of those two bands but it’s not all about us is it.

Taking a break from playing with horses, Lightyear front person CHAS PALMER-WILLIAMS is returning to our acoustic stage along with the wonderful CHUCK SJ (who makes up one half of Byenary) and LANDE HEKT of Muncie Girls fame, who finally got bored of Dean and Luke and decided to play some banging tunes on her own.

Tickets have been flying out since they first went on sale. Super Early Bird and Early Bird have completely sold out. Don’t sleep on it! GET YOURS HERE – http://bit.ly/mpf2020-tix 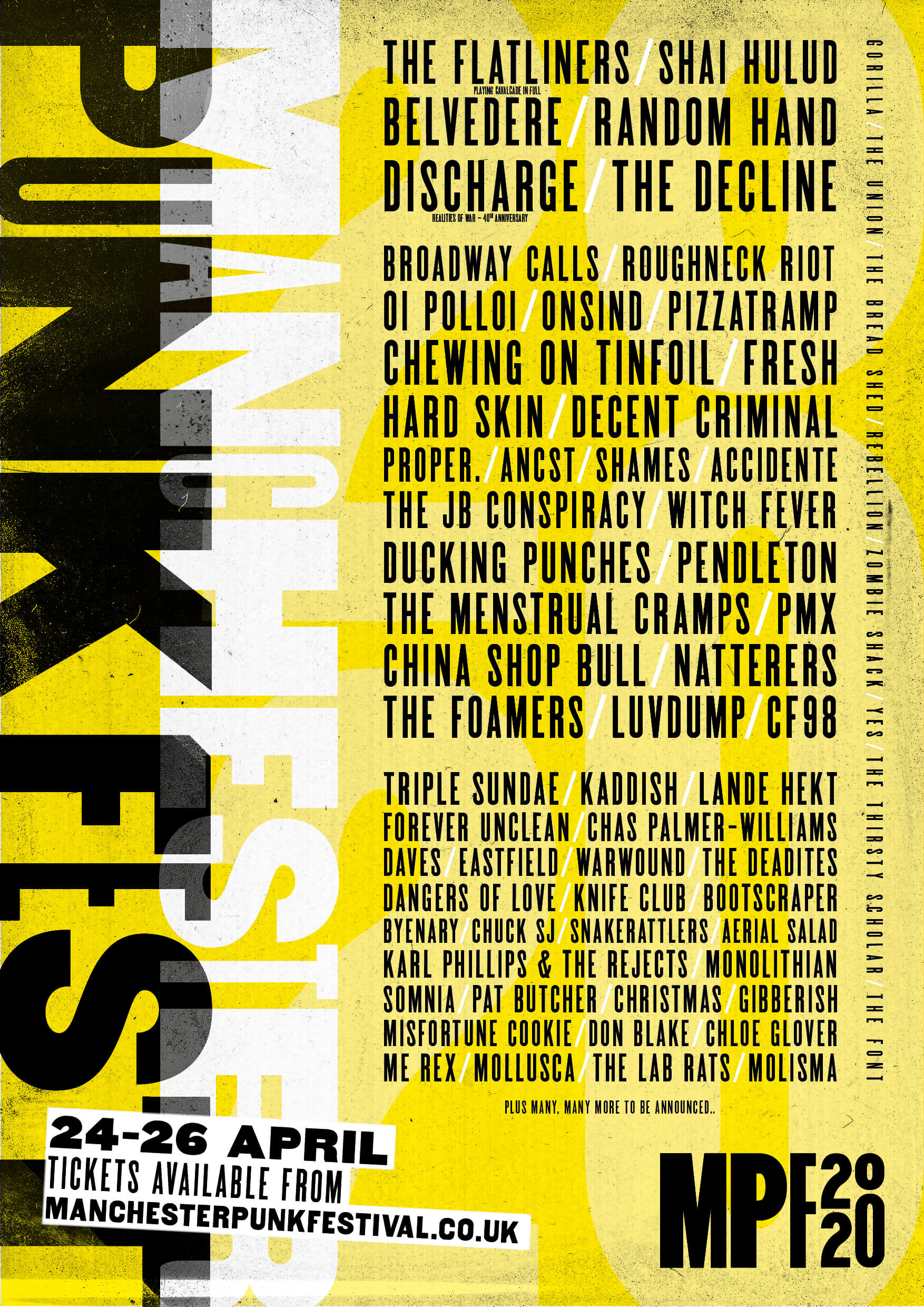