Burnout are a three piece punk rock powerhouse with a hard, modern edge that are based in Salford, UK, although, originally hailing from Taunton, Somerset. Raging drums and aggressive guitar tones are accompanied by melodic vocals and emotionally charged lyrics; all designed to carry the same intense energy whether they play through your speakers or on a stage. Burnout performs relentlessly and has played such events as Glastonbury Festival, Beautiful Days and Watchet Festival, not to mention playing alongside bands such as Discharge, Wonk Unit, Ferocious Dog, Citizen Fish, Strange Bones and hosting sold out headline DIY gigs that has gained them their following in the south west of England and Wales. Their second release ‘Inside’ in 2019 was a vast change from their previous album 'No Brainer'. Which moved them on from their pop punk roots into a punk rock somewhat heavier and emotionally conscious. This change carried on through their latest singles 'Drugs', 'Whipping Boy' and now 'Distressor' a raging, discordant, punk song clocking in at just over 2 minutes out on June 26th 2020. 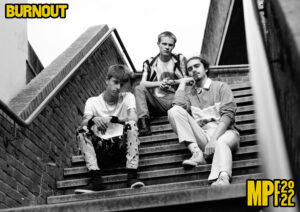