Coral Springs started out in late 2011 on the west coast of the Netherlands. What defines Coral Springs is a love for pop-punk and punk rock in the vein of bands like No Use For A Name, State Champs, Rise Against and New Found Glory. And the ways in which they seek for balance between the irresistible catchiness of pop music and the energy and intensity of punk rock. This balance is one of the qualities that makes their debut album ‘Always Lost, Never Found’ unique.

After career highs like playing Punk Rock Holiday in Slovenia and Werfpop and releasing a well received third EP Coral Springs was on the verge of celebrating their five year anniversary in the fall of 2016 when guitarist Richard announced his intention to leave the band. “That came as a bit of a surprise, but there was no doubt that the band would go on”, said Remy (drums). “The rest of us were not ready to give up on the hopes and dreams we have for this band.”

After a short but intensive search the band found a new guitarist in Joris. Siebe (bass): “Adding Joris to the band rejuvenated us all. We optimized the way we wrote and recorded demos at home which made it easier than ever to share new song ideas between band members. Plus Joris writes a lot, which drove Timon to write and share a lot more music as well.” In the end the entire band became way more productive . “We used to have a creative output of 3 songs a year”, adds Timon (guitars), “but in the 12 months it took to write this album we had about 30 demo’s ready!”

In July and August of 2018 the band traveled to Big Dog Recordings in Antwerp, Belgium to record their debut album with Tim van Doorn. “Tim isn’t just a good producer and engineer, he’s also a formidable songwriter with his roots in punkrock,” says Jo (vocals). “His guidance lifted the songs to a higher level.”

The result is the twelve track album ‘Always Lost, Never Found’. A surprisingly versatile record that seamlessly alternates fast upbeat punk rock songs with infectious powerpop and tinges of emo. “The album is a blend of the five personalities in this band,” Joris continues. “Every band member poured their heart and soul into the songs and the record reflects that.”

Every band member has their own personal input during the writing process which resulted in diverse lyrics covering different topics. “While assembling the record we concluded that ‘loss’ seemed to be an overarching theme,” Timon says. “Whether it’s about losing yourself or losing sight of old friends. ‘Always Lost, Never Found’ seemed to be the perfect way to summarize this.”

With this new album, their “expect nothing, give everything” attitude, a modest ambition and free from pretentiousness Coral Springs is ready for (and looking forward to) anything that the future might bring. 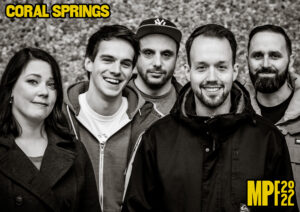