Formed in 2014, Cultdreams turned plenty of heads with their debut 2016 EP SAD and subsequent 2017 debut album Seafoam. The pair received praise from a diverse spread of press including Kerrang! Magazine, Total Guitar, She Shreds, The Quietus, Drowned in Sound, Louder Than War, New Noise Magazine, Substream, UPSET, Discovered Magazine, The Skinny, Alternative Press and many more for their bold and unflinching explorations of depression and PTSD, whilst shining a light on harmful behaviour, sexual harassment and every-day misogyny in society. After taking nearly two years away from the studio to tour Seafoam both in the UK/EU and across the Atlantic in the US/Canada—and guitarist/vocalist Lucinda Livingstone officially joining the lineup of their friends and labelmates Nervus last year—the arrival of Cultdreams’ long-awaited second album Things That Hurt came as welcome news. 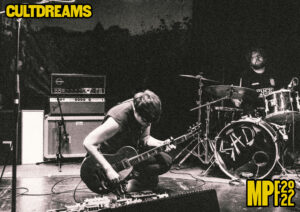