“Looking for melodic punk with a distinct message and a healthy dose of rock ‘n’ roll chaos? Look no further.” – Rock Sound

“Our Hell Is Right Here is a superb resiliation of the gritty resilience and sheer power that lies within Drones’ ranks.” – Kerrang! KKKK

2018’s ‘Exiled’, a concept record about the European refugee crisis, was described by Kerrang! as ‘An album as good as it is raging’ (KKKK). The album has littered Spotify punk playlists and clocked in 1.7m spins to date.

Fast forward to 2021 and Drones are looking inwards, reflecting on how both personal issues and the world‘s status can wreak havoc on the human psyche. The result? ‘Our Hell Is Right Here’: an unforgiving record that bears all, venting on topics from climate change to body dysmorphia, breakdowns in relationships to self-medication and hedonism.

Released in February, the record saw Drones get picked up by North American label Thousand Islands Records, in addition to their UK and European home label Lockjaw Records. An overwhelmingly positive reception to the album has seen coverage across Kerrang! magazine, Rock Sound, Classic Rock, Upset, Punktastic, Australia’s Triple J Radio and Kerrang! Radio to name a few, with a plethora of high-profile editorial Spotify playlists picking up the album’s five singles and clocking up a total of 180,000 plays and counting.

Elsewhere, the band have received airplay on BBC’s Radio 1 including interviews and a live performance at the legendary Maida Vale Studios, and live coverage of headline shows in the London Metro. The band also found time last year to record an original feature track for DC Comic’s ‘Legends of Tomorrow’ TV program, aired in the USA in 2020. 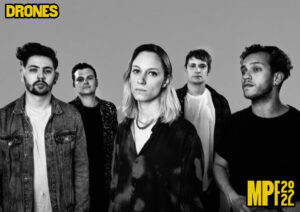