Knife Club were formed at Wotsit Called Festival in 2018 after Eliott Verity (Nosebleed) and Dan Flanagan (Haest/Matilda’s Scoundrels) drunkenly decided they wanted to start a band and get matching tattoos.

They subsequently went around the venue and randomly invited the other members, who were all playing at Wotsit Called, to join. Obviously, getting the tattoo was non-negotiable.

Zoë Barrow (Casual Nausea), Chris ‘Big Hands’ Hinsley (Revenge Of The Psychotronic Man), Dani Rascal (Faintest Idea) and Andy Davies (Revenge Of The Psychotronic Man) all agreed, probably assuming it would never actually happen. With band members living in Hastings, Ipswich, Kings Lynn, Manchester and Leeds the band had to endure a bitter north versus south divide and practises that can only be described as ‘logistical nightmares’. In fact, prior to hitting the studio to record their debut album, ‘We Are Knife Club’ the band had managed just one practise with everyone there.

Knife Club kept their identities secret until the album went on pre-order, yet again taking a joke too far and subsequently annoying/exciting everyone with their #whoareknifeclub? hype campaign. That fell flatly on its face when all their gigs were cancelled.

The band line up with Zoë and Andy on vocals, Eliott on guitar and vocals, Dan on guitar, Dani or Mark Tanner (Haest) on bass, Big Hands on drums and recent addition, Kim Morrison on keytar. They recorded their debut album, ‘We Are Knife Club’ in January 2020. It was produced by Ben Hannah (Nosebleed) at Organworks in Leeds.

After recording the album, they were raring to go and famously stated “not even a global pandemic can stop us now”.

In August 2021 they finally managed to play a gig… 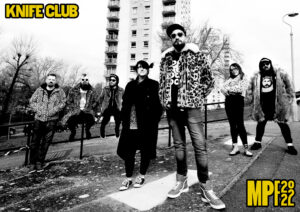