The passionate punk-pop of Martha began in the bizarrely named Pity Me, a village in County Durham in the North East of England.

Formed in 2011 by siblings Naomi (bass guitar and vocals) and Nathan Griffin (drums and vocals) alongside childhood friend, Daniel Ellis and Jc Cairns (guitar and vocals) who grew up in Pity Me and Chester-le-Street respectively, Martha went on to record their first demo in the Winter of 2012.

The band quickly became noted for their four part harmonies, delivered in undeniably North Eastern accents (much akin to fellow Wearsiders the Futureheads and Newcastle’s Maximo Park). Sonically, Martha is influenced equally by the Motown sound and artists such as the Replacements and The Housemartins, all culminating in a unique soulful brand of punk pop.

After singles on their own Discount Horse label and Odd Box Records, their debut album Courting Strong was released on Fortuna Pop (alongside the likes Comet Gain, The Pains of Being Pure at Heart and 80s new wave legends, The Primitives) in May 2014. Acclaim for the record included US public broadcaster NPR heralding Martha as “one of Britain’s best rock bands” (October, 2014).

Martha followed their sophomore LP, Blisters in the Pit of My Heart. Again the band worked with legendary indie label Fortuna Pop but this time the record saw a North American release via Dirtnap Records (known for the Exploding Hearts, the Ergs and the Marked Men). The band received further acclaim and achieved increased notability following the release of Blisters. The album received positive reviews from Kerrang Magazine, Pitchfork and the New York Times. The Independent Newspaper called the LP “one of the best pop albums of the year” (May 2016). AV Club, Rough Trade and Uproxx included the album in “Best of 2016” lists and the record went on to win Drowned in Sound’s Neptune Prize.

In 2019, the group released a third full length, Love Keeps Kicking with UK label Big Scary Monsters (home to American Football, And So I Watch You From Afar and Cursive). The LP garnered glowing reviews from the likes of the NME, DIY, Clash and Line of Best Fit. NME said "Love Keeps Kicking is Martha at their best" and Dork said of Martha, "they're a gem of a band that should be treasured". The release of LKK saw Martha play to their largest audiences to date, including sold out headline shows at Leeds’ world-renowned Brudenell Social Club, and closed out the year at London’s 1100 capacity superclub Heaven.

The band have toured extensively in the UK and Ireland as well as Mainland Europe and North America alongside bands such as Joyce Manor (Epitaph Records), Jeff Rosenstock (Polyvinyl), Iron Chic (Bridge Nine Records) and Radiator Hospital. In 2016 Martha were personally invited to perform at the Glastonbury Festival by Billy Bragg. In 2018 the band performed on The Chris Gethard show, broadcast across the US live on truTV. In 2019 the band played a host of festivals including End of the Road, Latitude and Truck festival. 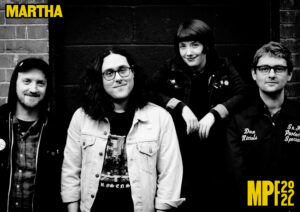