Hard-hitting! That’s the only way to describe this fearless group. There’s no poetry, no ambiguity – just direct, raw honesty as the Bristolian quartet tackle some very uncomfortable subjects head on. This is heavy in the most evocative sense of the word. The blunt lyrics are equally as important as the music.

Whilst refining their distinctive blend of euphoric black metal, post-rock and d-beat, Svalbard have incorporated a few more surprising influences along the way. From soft, mournful singing to progressive guitar leads, it showcases a sensitive dynamic that lends impact to their most crushing moments – of which there are undoubtedly many.

Whilst the underground has undoubtedly been in on the secret for a few years now, 2020 became the year that people well and truly took notice as Svalbard's third album 'When I Die, Will I Get Better?' landed on critic's end of year lists across the globe. At home, the respect and acclaim was clear to see as both Metal Hammer and Kerrang! lauded the record as a top 10 album of the year. 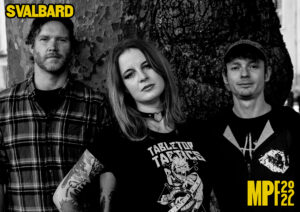