We got together in 2012 and are inspired by bands such as The Bronx, Cancer Bats, Come Back Kid and John Coffey. We have one mission; Stop the pussification and sophistication of society, and music in particular. Loud, straight forward, fast songs with the purpose to melt your face.

The first two years gigs were played in Holland and the UK. Early 2014, The Peterlees won the local ‘Live & Lazarus’ bandbattle. Later that year we got to the semi-finals of the ‘grote prijs van NL’, which is the biggest bandcontest of Holland, performing on a national level . In that same year our 5-song debut EP was released under the name P T R L S, and the video of Luckiest Man Alive went viral.

Early 2015 The Peterlees were shortlisted as 1 of 30 out of a ton of European bands to participate in the finals for the Groezrock Macbeth stage, the biggest punkrock festival in Europe. A second UK tour was done in April 2015, and we spit out a second EP, called G.M.F.B. which is released on a gnarly 33rpm piece of vinyl. After that we did many more shows of which some of those were in the Czeck Republic, Germany and Belgium.

In 2018 we released another EP, called ‘Are you a Beast?’ Louder, faster and heavier then ever before. And this one includes a Drum ‘n Bass remix by the notorious Alex Reza!

So get ready to moisten up your pinky and boost some fistpumps, The Peterlees are here to fuck shit up! 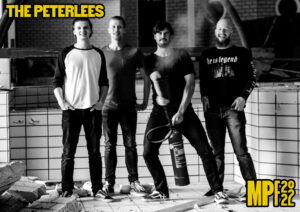