The Skints are known for their stylistic diversity across genres and tempos, and have the unique feature of three different lead vocalists in the group. While the very early inception of the band was rooted in a ska-punk style, The Skints have evolved to envelop the full range of influences from Jamaica from traditional ska, to rubadub, dub and dancehall plus British grime music, soul, pop and hardcore punk.

Influences for Swimming Lessons have been cited as far reaching as Bad Brains, Popcaan, No Doubt, Alton Ellis, Michael Prophet, Wiley and Weezer.

Their style has been referred to as “East London Reggae” and “music from Jamaica in a London style.”

More recently they have used the term “tropical punk” to describe their sound which started as a joke in the studio with Prince Fatty in reference to friend Hollie Cook; “if Hollie’s tropical pop then this album is tropical punk!” 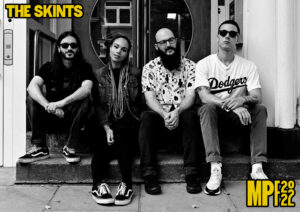