"It was Radio X’s John Kennedy who termed Tokky Horror “a hark to the glory of digital hardcore” and with a clash of breakbeat samples and guitar riffs more at home in hardcore punk than happy hardcore raves, he may not be wrong. The group’s play on the digital hardcore term (which was originally coined by Atari Teenage Riot in the late 90’s) “virtual hardcore” is a reference to how we have moved from the digital to virtual age. Tokky Horror could not embody this more, a punk band which had signed a record deal before they’d all met, and released music before they knew each other’s true names beyond instagram handles. Punk purists would cringe at how in-organic this technology centred approach feels. Yet in the middle of a pandemic, Tokky Horror had no other option. “We took to the internet to create, because we were trapped inside” Producer Dull Mastiff aka Zee Davine tells. “For a lot of people this was new, but for us, for freaks and weirdos on the fringes on society. For people who like music 99% of other people don’t. The internet has always been a space to come together, to find your people and where you belong. Now we just used it actively, and in a creative way”.

In the time since then Tokky Horror have released their collection of these home recordings via Alcopop! Records to the acclaim of punk and electronic fans alike. Playing alongside nu-metal stars Wargasm or being championed by RAM Records icon Mandidexterous, Tokky Horror are destroying boundaries in the name of a high energy, no-nonsense good time.” 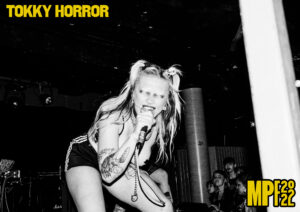