A body of work that culls from various styles weaved together into what Massachusetts-based punks A Wilhelm Scream appropriately call “A Wilhelm Sampler,” Lose Your Delusion finds the accomplished rock quintet at its most daring, experimental and cohesive.

Recorded at Anchor End Studio in New Bedford, MA and produced by guitarist/vocalist Trevor Reilly and James Whitten, the songs on Lose Your Delusion appeared as somewhat of a mirage for the band over several years during moments where the members of A Wilhelm Scream — Nuno Pereira (vocals), Trevor Reilly (Guitar, Vocals), Jason Milbank (Guitar), Brian Robinson (Bass, Vocals) and Nick Angelini (Drums) — privately went through a slow, rough stretch of uncertainty. This period of time, however, raised the stakes and renewed a strong focus felt during the early days of the band, which was centered around connecting with fans on an emotional level and providing strength to those who found it in the music.

Rife with real stories about the people, places and ideas that are important to the band and its history — along with working to permanently lose the distractions that cloud our daily lives — Lose Your Delusion is less about taking the piss and more about throwing bouquets. From the chaotic and experimental shot of punk found in album single “Be One To Know One” that squarely takes aim at anxiety, pain and self doubt to the politically charged “Apocalypse Porn,” the complexity of the album finds the band in unfamiliar territory that was wholeheartedly embraced by each of its five members.

“This is our most unapologetically earnest album to date,” said Reilly. “It's our fifth full-length record and it feels like our first in that we feel we have so much more to say and energy to put out into the world.

After all these years, A Wilhelm Scream have lived their lives and did whatever they needed to do to get to the point where they could assemble and write the songs that absolutely needed to be written. Each song on Lose Your Delusion is a product of never cutting corners at any point, be it with writing, recording, practice or performance. Providing commentary on the past few years and the toll it’s taken in regards to our collective stress, anxiety, frustration and panic, the album serves as a pillar in the band’s rich and evolving legacy.

As a band playing punk rock for over a decade, its members haven’t focused on success or image — it’s the ideal of music coming from an honest place that they strive to be their lasting legacy. Despite operating just below the radar, A Wilhelm Scream have carved out a reputation as one of the best live bands around, bolstered by their staggeringly rich albums of ultra-technical melodic punk rock firestorms. Playing 250+ worldwide shows each year, the band possesses a work ethic that can only be described as “heroic.”

“I guess it's because you never know when your new album is gonna be your final album so you really wanna put all ya got into it,” Reilly sums up. “That’s the legacy I want our band to leave behind when all is said and done.” 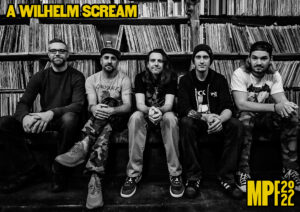