Since the formation in 2011 as a 2 piece studio side project ANCST has been co-spearheading a new wave of hardcore punk-infused death/black metal in the European extreme metal / DIY underground. While sporting both, a hardcore and metal socialization the melting-pot-monster has perfectly combined fierce melodic black metal, punishing death metal and brutal but yet metallic hardcore crust with angry and critical social political and personal lyrics.

With over 23 releases under their belt on labels such as Lifeforce Records (Heaven Shall Burn, Trivium, Caliban) Vendetta Records (Ultha, Woe, Thou) Supreme Chaos Records (Unleashed, Grave, Napalm Death) and many others, ANCST has been praised by both the international music press as well as HC kids and metalheads alike.

​Besides delivering their unique metal trademark sound ANCST has been no stranger to experimentation and has been incorporating elements such as dark ambient and even film music into their sound and has been releasing electronic music under the same name for years.

After transforming into a full-grown live band in 2014 ANCST has appeared on festivals such as Summer Breeze, Fluff Fest, Bloodshed Fest or the New Noise Fest and has been touring the European mainland as well as the UK relentlessly while having done all the booking themselves.

ANCST have fully embraced the DIY-ethic and has been doing things on their own from day one. Not only has Mastermind Tom Schmidt written all their songs, he has also recorded, mixed and mastered them in his own bedroom, co-released them through his own label Yehonala Tapes, did all artwork, has run his own PR, distribution and has founded his own booking agency. 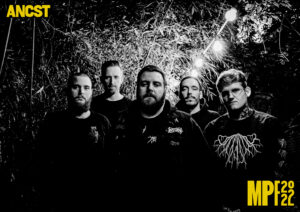