Indie punk pioneer Jeff Rosenstock is a must-know name in the Long Island punk scene. Hailing from Baldwin NY, he fronted the iconic ska-punk band The Arrogant Sons of Bitches, he toured the world with his critically acclaimed anti-capitalist punk collective Bomb The Music Industry!, carrying t-shirt stencils and spray paint to all-ages venues and house show basements in lieu of merch. He started the first donation-based record label, Quote Unquote Records, a full 2 years before Radiohead popularized the idea of pay-what-you-want music.

And through decades of solid output, rigorous touring, and unyielding punk ethos, he cemented himself as one of the most influential heroes of the DIY scene. Rosenstock is a self-made artist who's built a bridge between enraged, angst-ridden political catharsis and hard-hitting depressive emotional introspection. His voice is loud, raspy, and on the cusp of anger, but underneath that lies enough nuance and subtlety to make his music fun and arresting all at once.

In just a couple of years, Jeff Rosenstock has gone from beloved underground punk mainstay to a DIY legend and one of the most acclaimed figures in modern punk. 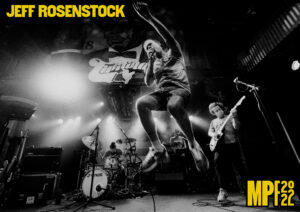