“Anti-racist lyrics and a Reel halfway through exemplify Neck’s riotous sound, as if The Clash were born on the Emerald Isle!”
The Irish Post

London-Irish contemporaries of their great mates, The Dropkick Murphys & Flogging Molly, Neck are, simply, the real deal. Not for nothing known as ‘The Heavy Artillery of Irish Music’ – they consist of an authentic Traditional Irish music lead section, a Clash-inspired electric backline, and a former Shane MacGowan's Popes' front-man, and call this intoxicating, exciting blend of electric Punk energy and uplifting Irish swirl 'Psycho-Ceilidh'.

And they have pedigree in depth: 3 albums – their seminal 2nd, Sod ‘em & Begorrah!, being rated variously 2nd and 3rd -best Celtic Punk album of all time ; an Anti-Racism / Pro-inclusiveness single in the UK charts (via, historically, being plugged in the House of Commons!) ; a movie appearance* ; noteworthy collaborations (Alabama 3, Hayseed Dixie, The Men They Couldn’t Hang, The Men That Will Not Be Blamed For Nothing) ; famous fans (Johnny Depp!) ; and their Trad. Irish authenticity seeing the Irish Cultural Centre bestowing on them the huge honour and accolade of playing a Trad. Session for the Irish team at the 2012 London Paralympics – due, they were told, to their frontman wearing his heart on his sleeve and simply that “ye know how to be” – a simple Irish expression that speaks volumes and meant more than a 5-star review! Subsequently, their kick-arse, high-energy live shows and extensive touring** has made them tried-and-tested festival favourites across three continents from Moscow to Texas!
.

*performing two songs in Film 4’s Belfast-set ‘Rom-Dram’ With or without You, Directed by Michael Winterbottom (Welcome to Sarajevo, Wonderland, 24 Hour Party People), & starring Christopher Eccleston (28 Days Later, Gone in 60 Second, Dr Who, Legend)
**Covering a wide range of events, from folk to metal, taking-in countless festivals, gigs & parties over Thirty Eight (!) European trips, Nine U.S. ones, Ten Irish ones and extensively all over the UK – from Cornwall to The Shetlands!

Neck are, subsequently, the ideal booking for any gig, festival or party. With their uplifting, intoxicating blend of the Legendary 1977 London Punk sound & authentic Traditional Irish music; high-energy, kick-arse stage show; (and a wee bit of craic & a 'Hooley': an Irish party), Neck make good on their rallying-cry 'Every Day's St. Patrick's Day!'. Most crowds want to have a dance around, a sing-along, and a great time – an exciting, memorable time – and that's exactly what Neck deliver! So it's no wonder they're tried-and-tested festival favourites – from Moscow-to-Texas (just see the list below) – including, amongst their numerous re-bookings, playing Glastonbury six times!

As for Punk gigs & festivals, amongst a whole rake of stuff, they've supported Stif Little Fingers countless times now, including at The Forum in London 4 times (!); they've played Rebellion 10 times (!); StrummerCamp 4 times; played on Flogging Molly's Salty Dog cruise (out of Miami) in 2018, with the likes of The Offspring & The Buzzcocks (amongst others); & totally knocked it out of the park at both The Great British Alternative (their 2nd time) & HRH Punk (where they headlined the 2nd stage, & even had a 'Jig Pit'!) in 2019.

Just some of the Festivals NECK have rocked the bejaysus out of (& quite a few more than once!):

“Manic psycho-Ceilídh from the London-Irish heirs to The Pogues' legacy” Hot Press, Ireland

“Bringing Irish Punk past The Pogues – a worthy contender to the Celtic Punk crown is born!” Irish Voice, USA
.
“…a daring, glorious and grand melody-drenched wall of sound that offers all the evidence required for the band to take their rightful place alongside Dropkick Murphys and Flogging Molly,” Rock 'n' Reel, UK

“…a full-on and in-your-face aural assault that combines the pathos of The Pogues, the folk lilt of The Levellers and the punchiness of Stiff Little Fingers to mesmerising effect.” Big Cheese, UK
.
“…one of the best Celtic-Punk releases ever! In fact both the band and release define what Celtic-Punk is. Neck are rooted with one foot in Punk attitude and one foot steeped in Traditional Irish music unlike any other group – this stuff is in their blood. If you've never heard Celtic Punk before and wonder what the fuss is about then there isn't a better introduction!”
Shite 'n' Onions, USA

“I really like Neck and have done for a while – there are other, similar, bands doing better somehow, but there aren't any doing it with so much fun 9/10” Tasty fanzine, USA

“Better than ever! Tip for any party!” – Album of the month / one of the 10 most important genre album!” SLAM, DE 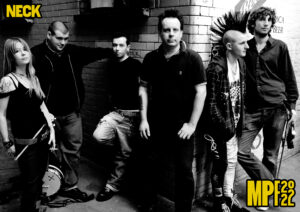