Starting way back in 2002, Pendleton spent the following 7 years defining Skate Punk for the Millennial Generation.

After a couple of banging EP's including 2006's You, By Us, a tour or two of Europe, a stint on the Warped Tour, a line up change and an album, in 2009 they imploded spectacularly.

Now, after 10 or so years away, founding members Mike, Shooter and Jay are joined by their good friend Jordan to play a one-off show at MPF 2022. 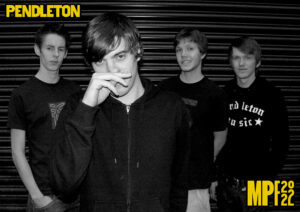