South East Grime Punk band Riskee & The Ridicule released their critically acclaimed album 'Body Bag Your Scene in 2019'. Described as "a bombshell of challenging themes" (Kerrang!) and “a focused assault that hits you in the heart like a hammer” (Mass Movement) – the Kent quintet released a string of new singles in 2020 and aren't about to slow down by getting back to where they belong, live on stage.

“A sound that belongs entirely to them, Riskee & The Ridicule step beyond this on their new album…it's emblematic of the feral potency at work on the full record.” – Clash

“Get on board now before they get huge, you can say you were part of something special.” – Three Songs And Out

“This is not like other albums…anger runs through this stunning 12 songs like blood…something about it you cannot – or should not – ignore.” – Maximum Volume Music

“This an album that 2019 desperately needs.” – Original Rock

“An album that needs to be heard.” – The Punk Site

“The album grabs you from the start and like a juggernaut, it will drive relentlessly, gathering pace as it takes you on a journey which will educate and hopefully inspire but ultimately invigorate.” – Punk4rt. 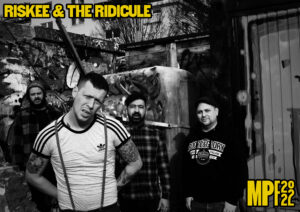