Snakerattlers is a two-piece band, which serves as a creative output for married couple Dan and Naomi. It's a hellbound voyage of deathpunk and fragments of the oldest, dustiest rockabilly. Those two genres combine with the couple's interest in the dark side of life, to make the band's own frenzied and furious take on music, known as "rattlerock". The sound of Snakerattlers is acerbic, ruthless, erratic, gargantuan and uncompromising. It has to be experienced live in order to be believed, as their sound is incredibly different to most two-piece bands out there. The music itself features blasting guitars, thunderous drums and howled vocals. True, hard-working Yorkshire folk; the duo hails from the deepest, darkest depths of ghost-ridden York, in the heart of North Yorkshire, England. 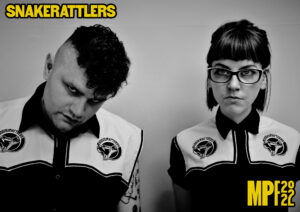