The Infested have smashed out of hiatus to deliver new record Raw Ensemble. Whilst often referred to as the UK’s answer to Leftover Crack/Choking Victim, The Infested have developed their unique twist on the gritty Ska/Punk/Hardcore sub-genre.

From 2004-2008, The Infested toured extensively with Leftover Crack in the UK/Europe and as The Crack Rock Steady 7 (a Scott Sturgeon and The Infested collaboration).

After taking a break from touring, 2008 marked the release of The Infested’s debut full length Myths, Lies and Hypocrites, which has become a much-respected classic in the Ska/Punk/Hardcore sub-genre across the globe. The album is still in heavy rotation and its popularity is ever-increasing. The album was re-issued on vinyl in 2013.

Following the success of Myths, Lies and Hypocrites, The Infested regrouped featuring a new line up and toured the UK in 2009.

Eaten From The Inside, The Infested’s second release was released in 2013. This was a more melodic and personal approach written and recorded whilst G was undergoing treatment for cancer. The music and lyrics reflect a difficult time in The Infested’s career, where the band weren’t playing shows.

The Infested remained on hiatus until a third record Raw Ensemble was recorded in 2018. Raw Ensemble returns to The Infested’s roots, delivering a darker approach to song writing. The band would soon reform to play various shows across the UK in 2019, highlights including Manchester Punk Festival and Boomtown Festival.

2019 was one of The Infested’s greatest years ever, as the momentum from 2008’s Myths album proves to be in full force, drawing in new fans and band interest. 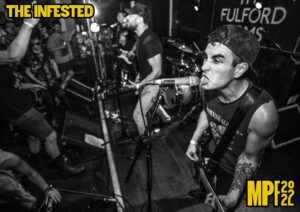