If you were to walk past TV Crime’s rehearsal room, seventh beer of the evening in one hand and ears still blown out from standing in front of a moshpit-aimed speaker stack the night before, you could be forgiven for thinking, ‘Hey, not bad, kindalike Royal Headache’n’stuff.’ Ok yeah, they’re not worlds away from Shogun’s band of garage-centric Sydneysiders – but there’s way more to it than just stripped-back rock’n’roll. This Nottingham band is very much its own entity.

In TV Crime you’ll find glam rock. Pub rock. Detroit soul. London punk. The hip-shaking sway of The Dirtbombs colliding head-on with the yob-fop powerpop of The Boys, only smarter and dumber and WAY MORE FUN than that sounds. In Clocking In and Clocking Out, the two tracks from this good old-fashioned double A-side 7”, you’ll find songs about the best and worst parts of the day (c’mon, we all know which is which), each delivered with the same amount of exuberance and just itching to transmit themselves from your turntable to your ears. They're the sound of pool cues ripping felt from the table as a deliberate part of the most audacious trick shot of all time, with ashtrays being emptied into pint glasses as part of a nutritious breakfast. For fuck’s sake, just listen to ‘em. 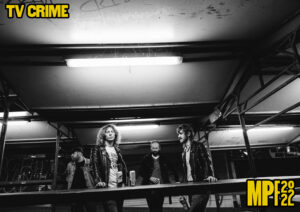